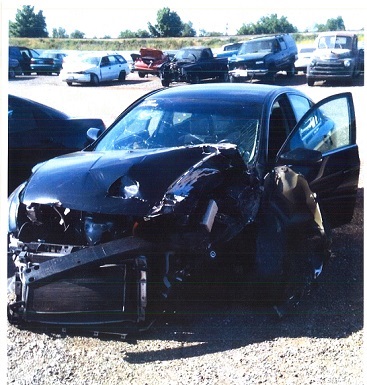 Tabak Law Firm recently achieved a very favorable settlement shortly before jury trial was scheduled to start in a very serious truck accident case – despite the existence of an extremely unfavorable witness and a CHP report assigning fault to our client. This case in particular underscores the importance of securing knowledgeable and experienced legal representation in cases involving severe “big rig” or tractor-trailer accidents. Most notably, our firm’s insistence on a clear and balanced understanding of the applicable traffic laws and thorough depositions of witnesses proved crucial in bringing our clients their fully deserved settlement.

Plaintiff Dorothy W, aged 86, was driving with her husband Richard (then 88) eastbound along Highway 88 in unincorporated San Joaquin County outside Stockton, California. Although it was 8:40 pm, there was still some light out and Mrs. W’s headlights were on. Eldo, the defendant, was driving a tractor-trailer combination as he proceeded north on Beyer Lane and planned to turn left onto Highway 88 to go westbound. At the intersection of Beyer Lane and Highway 88, Eldo’s big rig was controlled by a stop sign, but there was no traffic control for Mrs. W’s vehicle traveling along Highway 88 (posted with a speed limit of 55 mph). As Mrs. W approached the intersection at approximately 56 mph (per the “black box” data from her car), Eldo pulled his big rig directly into the path of Mrs. W’s vehicle as he made his left-hand turn, causing Mrs. W to collide with the rear-most axle of the 53-foot long bright-white trailer being pulled by Eldo.

A witness driving directly behind Mrs. W’s vehicle provided extremely unfavorable testimony for our clients, which led the responding CHP officer to assign fault for the truck crash to Mrs. W. The investigating officer’s assessment of fault against Dorothy was based on his conclusion that Eldo had started to make his left-hand turn across the Ws’ eastbound lane of travel when it looked to Eldo to be safe to do so – which gave Eldo the legal right-of-way – and thus Dorothy should have seen the large white trailer as a hazard in time to slow down enough to avoid an impact.

However, the turning point in the case came from Eldo’s own deposition testimony. In his deposition, Eldo testified that he did not see Mrs. W’s vehicle until after he felt the impact. Through this admission, it became apparent that Eldo could not have yielded to Mrs. W’s car, which he never even saw before starting his turn. Based on his own testimony, Eldo clearly violated Vehicle Code §21802(a), which states:

The driver of any vehicle approaching a stop sign at the entrance to or within an intersection shall stop as required by Section 22450. The driver shall then yield the right-of-way to any vehicles which have approached from another highway, or which are approaching so closely as to constitute an immediate hazard, and shall continue to yield the right-of-way to those vehicles until he or she can proceed with reasonable safety.

By admitting he did not see Mrs. W’s approaching vehicle before he made his turn, Eldo could not have yielded to her as required by VC §21802(a). Because he violated VC §21802(a), Eldo was unable to avail himself of §21802(b), which otherwise would have given him the right-of-way to complete his turn:

A driver having yielded as prescribed in subdivision (a) may proceed to enter the intersection, and the drivers of all other approaching vehicles shall yield the right-of-way to the vehicle entering or crossing the intersection.

This vital admission by Eldo in his deposition eventually caused the investigating CHP officer who initially assigned fault to Mrs. W to change his opinion about the cause of the collision. Instead, the officer assigned fault to Eldo once he – the CHP officer – learned of Eldo’s sworn testimony that he never saw the Ws’ approaching vehicle until after he felt the impact with the rear axle of his trailer – and therefore Eldo could never have evaluated the approaching vehicle on Highway 88 to determine whether or not it constituted an “immediate hazard” under the law.

Finally, a videotaped re-enactment of the collision performed by the defense team’s accident reconstruction expert provided critical and damning evidence of Eldo’s wrongdoing. The whole purpose behind this extremely expensive, and carefully orchestrated and time consuming re-creation was to demonstrate the defense theory of the case: that Eldo pulled his tractor-trailer across the Ws’ eastbound lane of travel to make his left turn when it was safe to do so, and had Dorothy been paying proper attention she would have yielded the right-of-way and thus avoided the impact.

However, careful planning and a lot of money failed to support the defense theory. This re-enactment used Eldo driving his tractor-trailer and making the exact maneuver he made at the time of the accident: a left-hand turn from Beyer Lane onto westbound Highway 88. In the video, though, the very first “run” (of 5 total) clearly showed an unsuspecting white SUV driving eastbound – as had Dorothy and Mr. W – suddenly forced to swerve to the right to avoid hitting the left rear-corner of Eldo’s trailer which was partially blocking their lane! Eldo clearly failed to properly assess the amount of time it would take his truck to clear the turn during the defense re-enactment, just as he had failed to do with Ms. W in causing the wreck which seriously injured she and her husband Richard. The morning after this video re-enactment came to light at the deposition of the defense photography expert witness, the defense accepted our settlement offers for both Dorothy and Richard – offers for amounts which they had previously scoffed and rejected – the very next morning.

Stew Tabak is the sole practitioner of Tabak Law Firm. He has been advocating compassionately and aggressively on behalf of injured plaintiffs throughout California since 1979. He is also a regular speaker at legal seminars discussing wrongful death, medical malpractice, civil discovery and jury trial practice among other topics.
View all posts by Stew Tabak →